Highlights of Akon's Visit to Uganda

(Left) Akon and His wife with a yellow shawl and (Right) President Museveni in a Jacket with Wife Janet Museveni and daughter in a Pink attire. Twitter Images

Aliaune Damala Badara Thiam, famously known as Akon, is a well-known Senegalese-American artist, entrepreneur, and philanthropist. On Friday, Akon arrived in Uganda, seeking investment opportunities to extend his business footprint toward Africa. He met with President Museveni to discuss his investment plans. His exertions involve a planned futuristic city. This emulates a recent visit by his wife, Ms. Rozina Negusei, in January this year. According to the Ministry of Foreign Affairs, Ms. Negusir met President Museveni, and they discussed different investment ventures. Negusei announced intentions to invest $12 million in Uganda’s entertainment industry when visiting the country with a group of prospective investors in January.

Born in the United States to Senegalese parents, Akon spent most of his childhood in the West African republic, where authorities welcomed him as a native son and lauded him for investing in Africa during global financial instability. Akon, 47, came to prominence in 2004 with his debut album. Among his hit singles is “Smack That,” which features rapper Eminem. He has sung with almost all the big names in the rap category of music in the USA. His focus now is to invest big in Africa, his motherland. 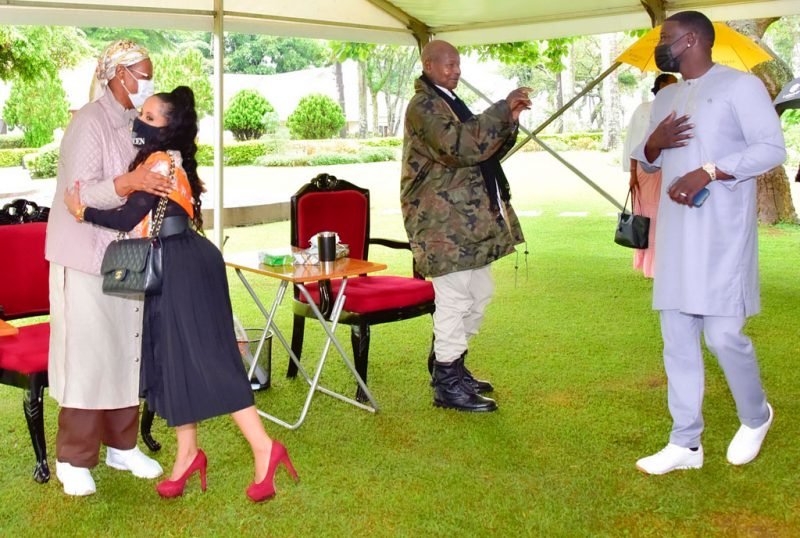 Akon met with Mr. Abbey Walusimbi, Uganda’s senior presidential counselor on diaspora relations, singer Eddie Kenzo, emissaries from the Ministry of Foreign Affairs, the Uganda Tourism Board, and Sheik Ramadhan Mulindwa of the Uganda Muslim Supreme Council. During his visit, Akon met with President Museveni to discuss different investment opportunities in various sectors of Energy, tourism, infrastructure development, real estate, among others, according to a statement from the Ministry of Foreign Affairs. Akon has visited several tourist sites and religious institutions during his stay in Uganda.

A Grammy-nominated singer and recording artist, Akon has hit the headlines in recent decades as a pan-African entrepreneur involved in investments on the 1.3 billion-person continent. Akon’s company struck an agreement with a government miner in December to establish a copper and cobalt mine in mineral-rich Congo.

Akon, whose actual name is Aliaune Thiam, started a group in 2014 that backs solar energy projects in many African countries’ rural parts. Akon Lighting Africa’s inspiration was deeply personal: he found his grandmother was still using candles in Senegal to light her home. In 2018, Akon unveiled plans to construct “Akon Port,” a $6 billion futuristic Pan-African smart city in Senegal. Akon City, funded by the Senegalese government, has been allotted a land plot outside of Dakar, the Senegalese capital, but development has yet to begin. Shopping malls, music studios, and tourist resorts will be among the attractions in the 800-hectare solar-powered area.

But Akon’s most optimistic aim is to create a $6 billion futuristic city in Senegal that he calls a “real-life Wakanda,” referring to the technologically sophisticated fictional African country depicted in the blockbuster film “Black Panther.” Last year, the singer called the similarities between Akon City and the utopian world in “Black Panther” a “honor.” Akon City is planned to have its hospital, police station, and even its cryptocurrency, dubbed AKoin. It offers a seaside resort, a tech park, recording studios, and even a “Senewood” zone that developers hope would further grow Senegal’s film industry.

Since the coronavirus pandemic broke out, a lot of the usual events have not been happening. Either the concerned authorities...