The Life of Derek Walcott, Caribbean Poet and Playwright

by Abiodun Ajayi
in ARTS, WORLD
0

Derek Walcott was an icon and distinguished playwright. Many commentators of Caribbean literature celebrated him. Although he rose from a Small Island, he won international acclaim for his poetry and plays. He founded a theatre college and passed the indigenous culture to upcoming artists and actors. His work transcended barriers of culture, race, and geography.

Derek Walcott was born and raised in Castries, Saint Lucia, in the West Indies. He was the son of Alix and Warwick Walcott. He had a twin, the playwright Roderick Walcott and a sister Pamela Walcott. He came from a complex colonial island and had a mix of English, Dutch and African descent. His mother was a teacher who loved the Arts and often recited poetry around the house. His father was a civil servant and a talented painter.
His father passed on when Walcott and his brother were just a year old. Therefore, they were raised by their mother, who taught in a Methodist elementary school. She worked hard to ensure that her children were provided with an environment where their talents could be nurtured. Their family was a part of a minority Methodist community who lived in a dominant Catholic culture on the island. They, therefore, felt a need to support one another because they were in the minority.

Derek Walcott took an interest in the arts early in life. He had the opportunity of being mentored by Harold Simmons, a professional artist who served as a perfect role model. At 14 years, he published his first poem. A newspaper in Saint Lucia published a story on his poem. It caught the attention of an English Catholic priest who condemned the poem as blasphemous. At that early age, he experienced criticism for his cherished work. Criticism from an authority figure in the society.

Notwithstanding, Walcott sold copies of his first poem to friends, and with the proceeds, he was able to cover the cost of printing. Society usually influences the exposure of writers. Saint Lucia is one of four islands in the eastern Caribbean. It faces the Atlantic Ocean on one side and the Caribbean Sea on the other. One is always aware of the sea in Saint Lucia. It is an inescapable natural presence that has deeply affected Walcott’s sense of being an Islander and a new world poet. 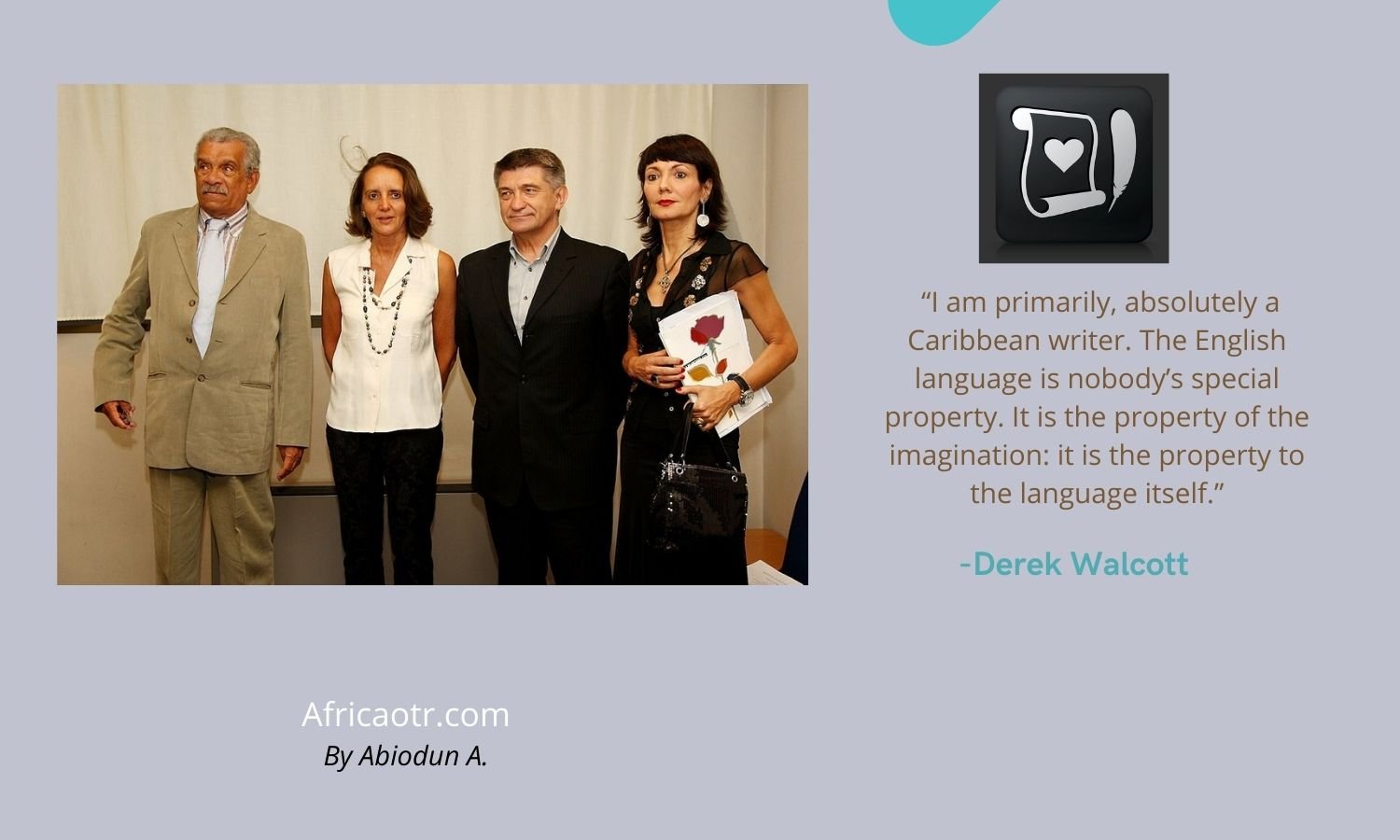 Derek Walcott was a prodigious worker. He typically started his day at 4:30 am, and often he continued until he had done a four or five-hour stint. He could be seen drinking his early morning coffee or with a stick of cigarette to warm him up. When the Swedish Academy awarded Derek Walcott the Nobel Prize in 1992, it only recognized what many commentators on Caribbean literature had celebrated. It recognized an artist’s response to what the Academy called the complexity of his own situation. Walcott’s life and work occupy an intersection of cultural forces.

This has characterized his work because his imagination has never lost contact with his native country. As a result of this, writing is rich with intonations of nature and colonial heritage, together with postcolonial identity problems.

In 1970 Walcott published an autobiographical essay titled “What the Twilight Says.” in the essay, he wrote of the Worlds that informed his childhood. Walcott struggled with a Schizophrenic situation as a result of a struggle between two cultural heritages. English and American critics have been surprised by his choice of Western literary tradition ahead of native culture. Some Caribbean commentators have accused him of neglecting native forms in favor of techniques derived from colonial oppressors.

His later works reveal a poet who has learned his craft from the European tradition but remains mindful of West Indian experiences. As a young poet, the task he undertook with Enthusiasm was to develop an idiom adequate to his subject matter.

Through his poetry, Walcott displays a passion for recording Caribbean life. This was also shown in his drama, which draws consistently on regional folk traditions. In the 1950s, after undertaking a degree from the University College of the West Indies, he wrote a series of plays that recounts an episode in Caribbean history. It depicts the struggles of slaves under the burden of labor.

It also depicts some of the sport and entertainment that the natives engaged in. Walcott also taught and wrote as a journalist in Grenada. Subsequently, he moved to Trinidad, where he put together a group of actors. He also founded the Trinidad theatre workshop.

Omeros is an epic poem that was written by Derek Walcott in 1990. It is divided into seven books with 64 chapters. This work was unarguably Walcott’s greatest work and one that brought him the greatest acclaim. Soon after its publication, it was recognized by major publications such as the Washington Post and the New York Times book review. In fact, the New York Times book review called it one of the best books written in 1990.

When Walcott was awarded the Nobel prize for literature in 1992, Prof Kjell Espmark singled out Omeros as a “major work.” Derek Walcott painted the cover of the book. It depicts some of his main characters together at sea. Some of the poem’s major characters are the island fishermen Achille and Hector, the retired English officer Major Plunkett and his wife Maud, the housemaid, the blind man, and the author. Although the poem’s main narrative occurs on the island of Saint Lucia, they are also scenes from Brooklyn, Massachusetts.

In the fifth chapter of the poem, Walcott shares some of his experiences in cities worldwide, such as Lisbon, Dublin, and Toronto. Unlike a conventional poem, Walcott divides the narrative between his characters and his own voice. In this way, the epic has no main protagonist. Rather, the poem assumes the voice of each character without much concern for narrative plotting. This arrangement makes the poem more interesting and brings the characters to life.

Although Walcott dedicated much of the 1960s to developing his theatre workshop, his primary focus was poetry. Between 1964 and 1973, he published four volumes, which continued his exploration of traditional forms and brought to light his position as a postcolonial world poet.

Castaway and other poems draw on the figure of Robinson Crusoe to suggest that artists are isolated. Castaway is a poet who creates and gives meaning to life. As a native of West Indies, Katie Jones suggests, the poet can be seen as a castaway from his ancestral cultures. He is isolated so that, even though he originates from both, he belongs to neither. The gulf talks about coping with internal division. He examines the water separating Saint Lucia from the United States to represent the bridge between the poet and all his loves. Between his adult consciousness and childhood memories. The gulf between his International fantasies and a feeling of community in his homeland.

Life and work in the United States

After Break’s period from his Workshop in 1976, Walcott directed his attention to the United States. He held a number of teaching positions. Much of the poetry he wrote in this period reflects a struggle between his role as an educator and a poet from a small island nation. In the poem, Sea Grapes, Odysseus is portrayed as a divided man who found himself torn between a husband going home and as an adulterer unable to forget his trespasses. While he taught at the University, he poured himself into his calling and his students.
He had a long-standing teaching appointment at Boston University. As he taught and traveled to different parts of the world, diversity is reflected in his writings. It supplied his poetry with various moods and images, from the images of painful departures to images of the guilty homecomings. He took on the responsibilities of one called to read and lecture around the world.

We are often tempted to believe that the single most important factor determining success in life is how smart and talented we are. This could not be farther from the truth. There is a science to Excellence.

Hard work and perseverance are essential ingredients to getting what you want out of life. They are catalysts that help turn our vision into reality. However, your success in life often depends on the people you choose to spend your time with. It is not how smart you are, where you were born, or the environment you grew up in.

Derek Walcott is a typical example of someone who surpassed his wildest dreams, even though he came from a small Island. He won the noble prize in literature. His father was not a Diplomat or an erudite scholar. His father died when he was barely a year old. His father was a civil servant. But his father instilled some traits in him that fueled his passion for art, and he moved with people who helped his vision.

Vicente Guerrero: The Afro-Mexican Leader That Freed Mexico from Spain

I cover top developments and news in the world of the Caribbean. My focus is on the economy, business, agriculture, and travel.

In a court in Barcelona, a judge has ordered that Colombian music diva Shakira could face trial in Spain for...

UK Journalist Sued by Russian Billionaire over a Book about Putin