by Faith Sanyu
in Crime, Obituary, THE DIASPORA, WORLD
4

On 10 June, Wednesday, in Boston, George Floyd protestors beheaded the statue of Christopher Columbus. Early Wednesday morning, a crime scene tape covered the monument in Christopher Columbus Park, on Atlantic Avenue in North End. Most certainly, it was not the first time to vandalize this statue. The activists also ripped down a monument of Columbus in Richmond, Virginia, in 2006, and 2015 with the slogan “Black Lives Matter.” On Tuesday night, over 1,000 protesters assembled for a rally in Richmond in unity with the indigenous community.

After these demonstrations, several communities ripped down the statue and tossed it into a lake. People at the scene also said they sprayed and burned it. In October, activists made a national attempt to cease celebrations of Columbus Day holidays and opt for Indigenous Peoples’ Day. Today, after the demonstrators had beheaded the statue of Christopher Columbus in Boston, they tore down many more memorial statues in other states. As police violence and racial injustice rallies across the country progress, the push to expel monuments of slave masters, colonialists, and confederate signifiers widely spreads. 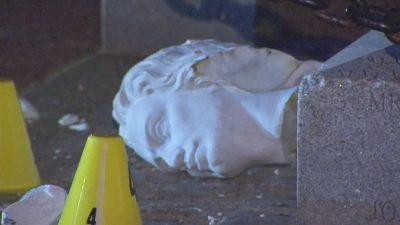 Christopher Columbus is among the first Europeans in the Modern World they have critiqued for the violence and murder of the Native Americans. CBS Boston confirmed that the broken head of the statue lay on the ground in Boston’s Christopher Columbus Park. The city employees removed the statue and put it in storage this Thursday morning. The Boston Police Department retrieved the head of the statue, which protesters destroyed overnight.

“This particular statue has been subject to repeated vandalism here in Boston. Given the conversations that we’re certainly having right now in our city, Boston, and throughout the country, we’re also going to take time to assess the historic meaning of this action,” Mayor Marty Walsh said on Wednesday.

Other Beheaded Statues in America

Meanwhile, the same activists are removing statues of slave owners and colonialists throughout the country. The Colombus statue was demolished days after demonstrators in Monroe Park had destroyed the Confederate General Williams Carter Wickham’s monument. 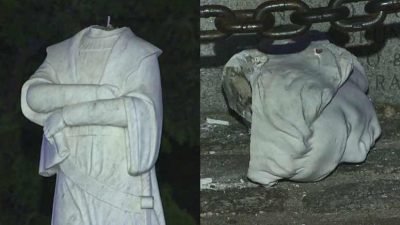 Protesters also removed and defaced several sculptures of the Confederate in Alabama earlier this month. This happens after the General Prosecutor reminded them, as they remove the statues, there is a penalty. The same activists furthermore, tore down Robert E. Lee in Birmingham, a Confederate memorial. Moreso, they destroyed another structure just outside a school in Montgomery.

Last week in Philadelphia, demonstrators destroyed and ripped down the monument of the retired provocative police officer and politician, Frank Rizzo. Undoubtedly, they have not destroyed statues in parks only. The United States Navy confirmed on Tuesday it was working on a policy of banning the Confederate Flag, just about a week following the Marine Corps’ release of the recommendation.

David Portnoy Goes Off On Warren Buffett Over The Airline Stocks

The royal family in South Africa has verified that Queen Noloyiso Sandile has died of Covid-19 having been on the...

Fear of the Chinese Stock Market Plunging after Going Bullish

Coronavirus is Likely to Affect Over One Million International Students

Trump’s Decision to Withdraw from WHO attracts Mixed Reactions

David Portnoy Goes Off On Warren Buffett Over The Airline Stocks

PlayStation Virtual Reality is The Future Of PS 5