“IBK, Get Out”: Thousands in Mali Demand President Keita’s Resignation

At Freedom Square in Bamako, the Malians demanded President Ibrahim Boubacar Keita’s resignation. Activists assembled on Friday on a central square in Bamako, encouraging minority party supporters and government opponents to oppose the President’s exploitation of the multiple crises the nation is facing. The presidential palace deployed heavy security by thousands of protestors. Thousands took to the streets of the capital of Mali and demanded the president’s resignation.

Numerous political parties have coordinated mass protests, sponsored by a prominent Muslim leader, Mahmoud Dicko.  Some protesters waved banners with the slogan and acronym by which the head of state is popularly known, “IBK, GET, OUT.” Imam Mahmoud Dicko and other members of rival political groups participated in this major demonstration.

Furthermore, some had posters demanding the release of Soumaila Cisse, an ex-Prime Minister, and opposition politician. Armed men abducted him in volatile central Mali on March 25 during his campaign for a forthcoming parliamentary electoral campaign. Last month, after some sit-in outcomes were refuted, a long-related parliamentary election also triggered riots. The Malians viewed the polls as a leap towards the settlement of the crisis in Mali. 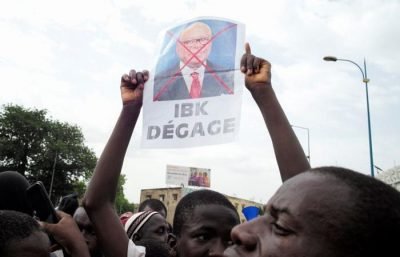 Recently, the opposition in Mali formed an alliance, including major political parties and activist groups. They later planned the protest on Friday. Imam Dicko spoke to his followers at Freedom Square in Bamako, Mali. The army started to shoot, frightening the peaceful protesters at the presidential palace. Water guns and tear gas quickly dispersed them. Under the leadership of the prominent Muslim leader, Mahmoud Dicko, the alliance labeled Keita’s administration “chaotic,”. They accused Keita of not tackling the nation’s deteriorating security and economic system. Dicko is a famous mufti who was a close friend of Keita, a few months back before he joined politics.

The cleric, who formerly asked citizens to vote for Keita, now says he ought to resign, failing to rule up to his promise of peace restoration to Mali. The Malians elected Keita in 2013 and he won another term in 2018 for a second five-year term.  Throughout his leadership, the nation has faced attacks which his administration has battled to alleviate. Its first violent attack in Northern Mali in 2012 killed thousands of troops and civilians. Since that time, the war has stretched from central Mali to Burkina Faso and Niger.

According to the United Nations, throughout the three countries, as of 2016, assaults have risen exponentially, with over 4,000 deaths in 2019. Certainly, four million citizens of Mali require humanitarian aid, and this year alone, a million have been left homeless.  Undoubtedly, the people are tired of the brutality and government’s incompetence to protect its civilians.

Top 5 Tips to Minimize Risk to Lose Money in Trading

A couple of months ago, Africa’s financial journey was bright. Development Bank in Africa projected a 3.9% growth in 2020...