The Rich Woman Controversy: Is this Nigerian Woman Richer than Africa’s Richest Man?

Ehizogie Ogbebor and her assets

Aliko Dangote is the richest man in Africa, but news and videos have gone viral about a certain rich Nigerian woman. Some sources claim she is richer than Wizkid, Davido, Burna Boy, and even the mighty Aliko Dangote. This Nigerian lady has people’s heads rolling, and their jaws dropped. The video that has over 300,000 views on YouTube is now the talk of the town.  The wealthy woman Ehizogie Ogbebor, 35, was born in Benin City, the state of Edo, on 15 June 1985.

In reality, while the woman under consideration is wealthy, it is entirely absurd to claim she has more cash stashed away than Aliko Dangote. This claim is more than a reach; it is a stretch. But, far from that, the woman also has a remarkable deal of publicity, and the world would never have learned of her until this video. Read on if you’d like to dig more in-depth about this lady and the source of her wealth.

Is the lady in question truly richer than Aliko Dangote? If so, why hasn’t Forbes listed her among the rich in Africa? Whatever the film shows, Ehizogie can’t be wealthier than Dangote. She got crazy cash from her marriages and businesses, but Aliko Dangote is still the richest, not only in Nigeria but also in Africa. To this day, people are speculating on the origins of the big bucks she boasts and wastes. The public does not believe that the businesses she runs would give her such a luxurious life. 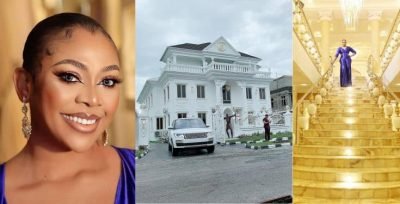 While she was six years old, Ehizogie allegedly took part in a traditional dance at the close of the year, in the Oba palace of Benin, where the Oba (King) marched up to her with several chiefs and proclaimed her head is worth a crown. Ehizogie married a man with whom she had two children early in her life. Yet the union did not last.

After ten years, she married Kenneth Bramor, a billionaire and oil tycoon based in Warri state. Now, here is where the narrative gets interesting. She gave birth to two children in her recent marriage with Kenneth Bramor. At their wedding, they dashed out iPhones and two brand-new Toyota Camrys as souvenirs to those who attended. While her wedding hosted the elite of Nigeria, comprising Senators such as Senator Dino Melaye, it didn’t last more than a year. Eight months later, Ehizogie quit her marriage and gave explanations that stunned those who cared to listen. 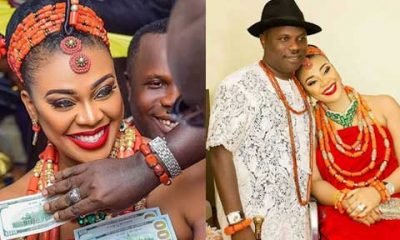 Ehizogie revealed in a shocking interview that her former husband was a cult man who wanted to sacrifice his six-month-old baby girl! This sounds like Nollywood, but it’s real. She claimed her husband and 11 other cultists were operating alongside him. He had made a bargain with this cult, and one condition of this agreement is that he should keep recycling women. She claimed this explains why he engaged six more women and has ten kids outside their marriage.

Her former husband, Kenneth, responded to the allegation that he filed for divorce based on Ehizogie’s unfaithfulness. He found out that Ehizogie was always under the sheets with her ex-boyfriend, Richard, named Duke of Spade. He further implied that the son she produced was a product of extramarital affairs rather than his biological child.

Her Source of Wealth.

Once Ehizogie abandoned Kenneth, she didn’t flee in tears. If she shed tears, the million Naira and Dollar notes wiped them. Ehizogie operates a profitable inner and hotel business called Sayaveth Interiors & Hotels, besides the funds from that union. She completed a famously costly mansion worth a million dollars, which she unveiled and celebrated on her 35th birthday. Eight years before she ventured into interior furnishings, she served as a marketing consultant with an insurance company. Yet, amid all the assumptions and concerns, one thing remains crystal: Ehizogie is embracing and enjoying her luxurious life!

Women in The Professional Tidying and Organizing Business

Before the war erupted in Ethiopia's Tigray region, Eritrea had already gathered around 50,000 Eritrean refugees. Many of these refugees...

Adaora Lumina Mbelu: A Legend in the Making

Women in The Professional Tidying and Organizing Business

What Easter Celebration Options Are There Amid Lock Downs?

The Kenyan Education System Takes a Hard Blow from COVID-19