The pop icon exposes her belly in a flower bikini, stiletto heels, and a vibrant hairdo.

by Faith Sanyu
in Celebrities, THE DIASPORA, WORLD
0

An Instagram post revealed that Nicki Minaj is indeed pregnant with baby cries anticipated sooner than we thought. Nicki Minaj has stated that she is expecting her first child soon. The rap artist initially spoke and confirmed her retirement last year and wanted to start a family. The 37-year-old singer posted a collection of glamorous pictures on her Instagram page that revealed her belly is cradling in a flower bikini, stiletto heels, and vibrant hairdos.

She captioned one photo, “#Preggers,” while on another, she wrote: “Love. Marriage. Baby carriage. Overflowing with excitement & gratitude. Thank you all for the good wishes.” 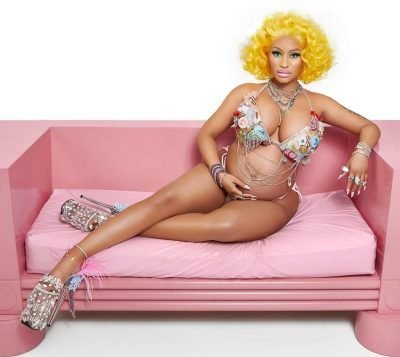 The Mega Jazz musician was instantly overflowed with encouraging tweets with the actress Halle Berry answering: “YES, Congratulations beauty!!” Minaj surprised her fans last year by declaring her retirement and with a desire to build a family in a post that has since been deleted.

“I’ve decided to retire & have my family. I know you guys are happy now. And to all my fans, keep reppin me, do it til da death of me… Love you for LIFE,” she wrote.

After that time, she has come up with a remix of Doja Cat’s Say So on Trollz, a 6ix9ine album, and has topped the Billboard Hot 100. As Minaj responded to a fan in May, she fueled speculation about her pregnancy. The fan asked her for a baby photo, but she replied, “The world ain’t ready yet.”

Nicki Minaj married Kenneth Petty, a 42-year-old, in 2019. Later she claimed during an interview that she wanted to be pregnant “at the end,” which is one of the reasons she got married. When it arose that Petty was accused of alleged rape in 1995 and was then jailed for murder for seven years, their romance story ran bitter. The rappers, Drake and Meek Mill, were some of the suitors Nicki Minaj dated in her past.

The Intelligent Investor: Is Warren Buffett Worth Denial?

Face Masks Which Athletes May Use While Exercising

Exercising is an important thing for the human body. This is because, through exercising, one can secrete wastes through the...

Catherine Phiri is The Female Boxer You Need to Know

Thanks for subscribing! Please check your email for further instructions.